Abrolhos has an excellent area for scuba diving and free diving. The average temperature in winter is 24° C and in summer it is 28° C. The clear waters of the Park make it one of the main diving spots in Brazil as its coral formations harbor a great diversity of marine fauna besides wrecks of the last century. In the islands, the main attraction are the birds that build nests in the rock formations.

From July to October, the warm and calm waters of Abrolhos receive humpback whales, who migrate from Antarctica.

Take the opportunity to check the options of tours and schedule the one that suits you the most.

Santa
Catharina
Rosalinda
Guadiana
Fauna and Flora
Abrolhos’
Reefs
Coral reefs are among the richest ecosystems in the world. The region of Abrolhos has the main formation of corals of the South Atlantic.

Among its main attractions are the chapeirões, columns of coral of up to 20 meters of height that rise abruptly of the sea bottom and open in arcs near the surface like immense submarine mushrooms.

The waters, always warm and of turquoise blue color, hide true sanctuaries where inhabits an infinity of marine beings. The main species forming the chapeirões is the coral-brain, which is only found in the Bahian coast.

Abrolhos is home to another 15 reef-forming coral species. On the reefs closest to the coast, the chapeirons are so close together that they form true platforms.

The humpback whale (Megaptera Novaeangliae) is a species that inhabits all oceans. They are migratory animals that travel annually from feeding areas in high latitudes to breeding areas in the tropics and subtropics. They often breed in Brazil (Bahia) and spend the summer near Antarctica feeding on krill – a tiny type of crustacean resembling a small shrimp.

An adult humpback is up to 16 meters long and weighs up to 40 tons. One means of recognizing it is by the white pectoral fins and very large in relation to the size of the body – they can reach up to a third of the total length of the animal.

The gestation of a humpback lasts for about a year and the puppy, which is already born about 3 meters long, weighing up to three tons, suckles about 200 liters of milk a day during the first year of life.

The whaling in Brazil has been banned since 1987 after more than a decade of campaigning and activism by whale advocacy organizations against the interests of businessmen and politicians involved in the whaling industry.

According to the IUCN and the Plan of Action for Brazilian Aquatic Mammals (IBAMA – 97/2001), humpback whales are classified as vulnerable and included in the official list of species of Brazilian fauna threatened with extinction (IBAMA 1522 Dec. 10, 1989). Of an original population estimated at 250,000 in all oceans, there are approximately 35,000 individuals. 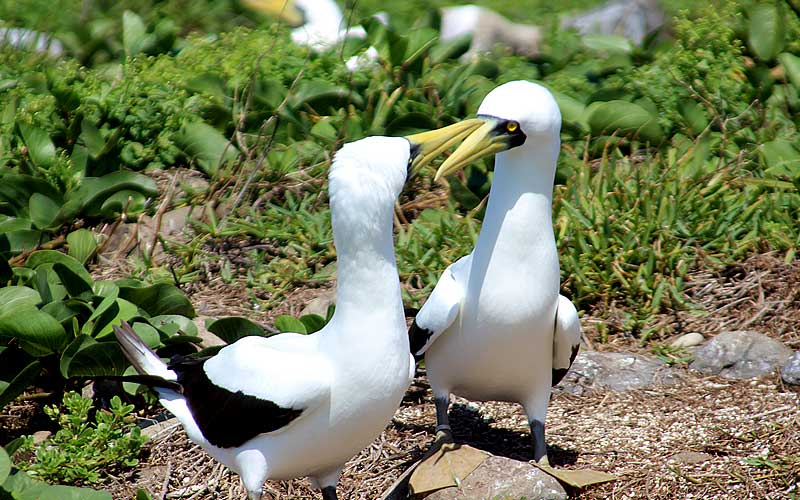 Most birds present in the park area come to nest, but others like migrating seek shelter and / or food. Among the species observed making their nests in the islands are: Sula dactylatra (masked or white atobá), Sula leucogaster (brown atobá), Fregata magnificens (tesourão), Sterna fuscata (trinta réis das rocas), Anous stolidus (benedito or viuvinha) and Phaeton aethereus (grazina or rabo de palha).

The white Atobás (Sula Dactylatra) are the predominant birds in the Abrolhos archipelago. To catch the fish they feed on, the atobás can dive up to 8 meters into the sea. They have developed this ability due to a gland they possess beneath the tail feathers. By passing the beak into a fat-producing gland, and rubbing it through the body it waterproofs its feathers. After completing the waterproofing work, he dives, picks up his food, and leaves the dry water, ready to start flying again.

Atobás also usually have their beak open for air intake. According to researchers, this movement happens so that it heats up after the dives.

The coloration of some parts of the islands alternates between the black of the rocks and the white of the guano (excrement) of the beneditos (Anous stolidus). From March to November, Guarita Island becomes the main breeding place for this bird. 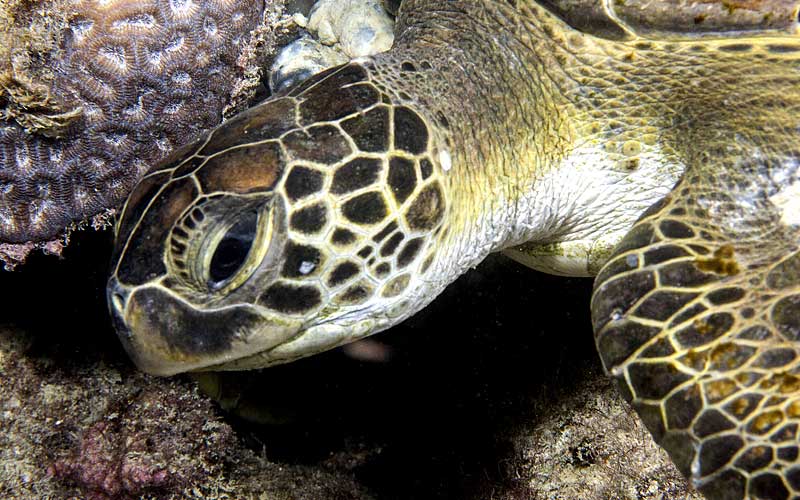 Sea turtles search for Abrolhos to reproduce and feed themselves. During the summer (between November and February) the species Carettta caretta (head turtle) and Chelonia midas (green turtle) lay their eggs on the sandy beaches of the islands of Abrolhos, and the species Eretmochelys imbricata (comb turtle) is seen feeding of the invertebrates inhabiting the reefs.
Fish 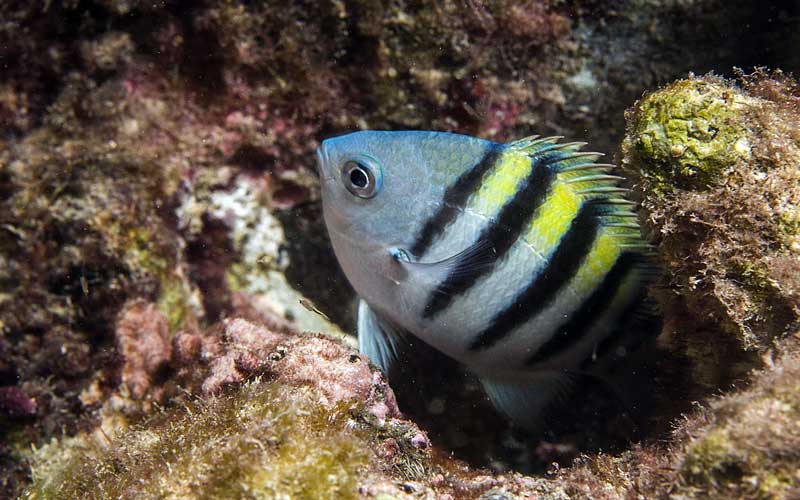 There are reports of the description of ninety-five species of fish that inhabit the region of Abrolhos. The ecological model of the fringed reef area of the islands of the archipelago shows that there the biomass of fish is much higher in relation to the total biomass when compared to other reef areas, which suggests an effect of the park management program, which prohibits fishing in the area. Among the species identified, 39% are herbivorous (Scaridae, Acanthuridae, Kyphosidae), 54% are omnivorous (Haemulidae, Balistidae, Pomacanthidae, Lutjanidae, Pomacentridae), and 7% are carnivorous (Serranidae, Carangidae, Sphyraenidae).